“Enjoy the little things, for one day you may look back and realize they were the BIG things.”

Here on our SC barrier island, there is some amazing wildlife.  One of the most intriguing species is the alligator.  It seems to thrive on our warm temperatures and plentiful food sources, especially around ponds and lagoons.   A typical gator will have up to 80 teeth, which are replaced by new ones as they wear out –   upwards of 2,000 in a lifetime.  Interestingly, alligators do not use their teeth to eat, their food is swallowed whole.  The teeth are used to capture and hold prey.

GATOR IN THE SWEETGRASS

“Anyone who doesn’t take truth seriously in small matters cannot be trusted in BIG ones either.”

Alligators are often seen basking in the sun because they are ectothermic – meaning they rely on external sources to raise their body temperature.  Although they seem slow and lethargic, they are actually very fast over short distances (just watch one as it captures an unwitting pond-side bird).

“Attitude is a little thing that makes a BIG difference.”

It is said that to outrun an alligator, one should travel in a zig-zag pattern because they only move in a straight line.  This may, however, be an urban myth and is certainly something you don’t want to test.  Rather than chase a human, an alligator will usually retreat into its habitat unless it is threatened or more importantly it feels its nest or babies are threatened.

Oddly, although very protective of their eggs and infants, the most dangerous predators of juvenile alligators are mature alligators (including their parents), especially in areas where there is overpopulation.   Here on Kiawah, we typically see them from the time they are very young until they grow to about 4 or 5 feet, and then they disappear.  One of my most interesting gator sightings was in a lagoon on one of our golf courses. The gator was pushing a whole deer across the water, obviously his next meal.  It was a good lesson on the importance of always having a camera with you.  I didn’t.  😦

“The BIG picture doesn’t just come from distance; it also comes from time.”

One day not long ago, my nephew John (also a photographer) was visiting me from New Jersey, and we went out to shoot some egrets that had created a rookery on a nearby lagoon.  As we were walking from the car I had my lens focused ahead on the birds and was walking toward the water.  Suddenly my nephew yelled, in his loudest voice, “Aunt Tina… STOOOPPP !!!!!! ”  There, no more than 2 or 3 feet ahead of me (and directly in my path) was the largest gator I’ve ever seen.  He had to have been 10′  long, perhaps more.   Fortunately, he had no interest in my foolishness and chose to turn away and slither into the water.  As I recovered from my shock, I managed to grab the shot above before he slipped into the lagoon and disappeared from sight.
. 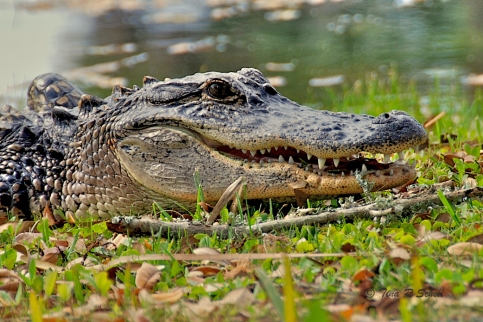 GATOR WITH A STICK

There is only one BIG risk you should avoid at all costs, and that is the risk of doing nothing.”

Denis Waitley
.
I learned several valuable lessons that day. 1) NEVER walk with your lens to your eye without watching where you’re going.  2) ALWAYS recognize the sound of terror and respond accordingly.  3) It’s better to shoot with a companion if possible.  4)  Just because the alligators you see are 4 or 5 feet long doesn’t mean there’s not a 10 footer lurking somewhere nearby.  And finally, 5) The definition of BIG changes exponentially when there’s a 10 foot alligator just beyond your next step!