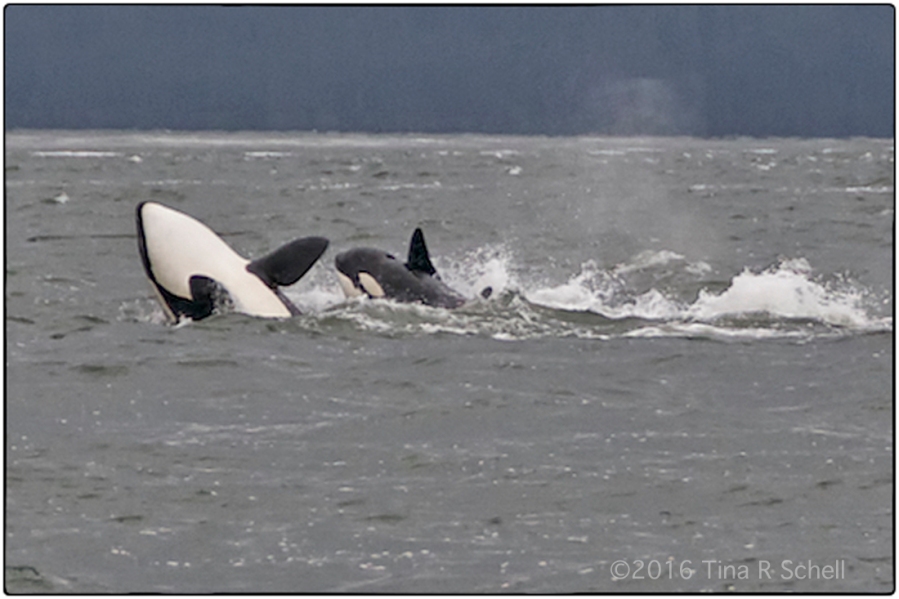 This week rather than doing my own “looking up” I’ve chosen to feature some amazing orca gymnastics in which the subjects, truly amazing creatures, are actually doing the looking. In my opening capture we see a large orca (which can weigh up to 9 tons and be up to 32 ft long) doing a backstroke as his fellow pod-member swims along beside.

“When everything has gone down, God wants you to look up”

While our weather in Victoria wasn’t the best, we decided to don the huge jackets, wool hats, fleece gloves and waterproof pants offered by our whale-watching charter and brave the wet cold to seek orcas.  After a freezing, drizzly speedboat ride that lasted 90 minutes we were rewarded with an incredible show provided by a very cooperative pod of these beautiful animals. Above I’ve included a boat-full of whale-watchers to give you an idea of the orca’s size. 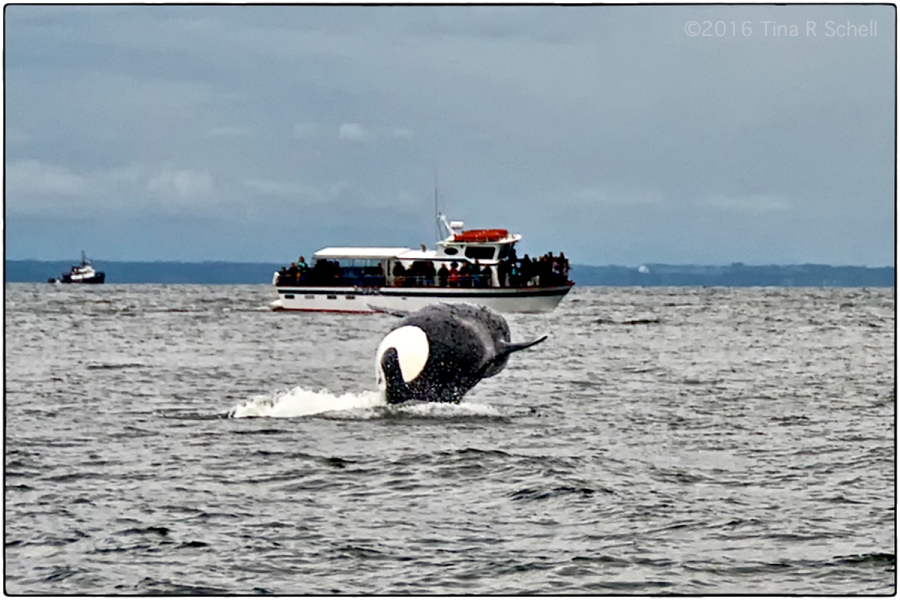 “Keep looking up, don’t give up, you never know when your sun will begin to rise.”

I had to look at this shot a few times to figure out what was going on. If you look closely you’ll see that the whale’s dorsal fin is pointed horizontally to the right as she jumps toward the boat. The fin itself can be up to 6 feet tall and is larger in males than females. As we watched our pod cavorting it was very clear which were the males based on this disparity. Interestingly, orcas in captivity often suffer from collapsed dorsal fins. Scientists have determined that the fins are made of collagen and are upright because of continual pressure from the water as they swim in open seas – sadly something unavailable to captive whales.

“Never forget to look up. Only the connoisseur sees high art.”

The captain of our boat, part of Eagle Wing Tours, was terrific. She rode the waves like a cowboy, jumping and flying across the water at top speed. She was very knowledgeable about the whales, which are actually members of the dolphin family. In the northern Pacific there are two very distinct communities of orca – meat (primarily seal) eaters and fish (primarily salmon) eaters. The population of the latter have been on a steep decline due to a decrease in salmon quantities and habitat. Much of the issue is related to salmon farming which affects the numbers of wild salmon, and the damming of waters which used to feed their hunting grounds. 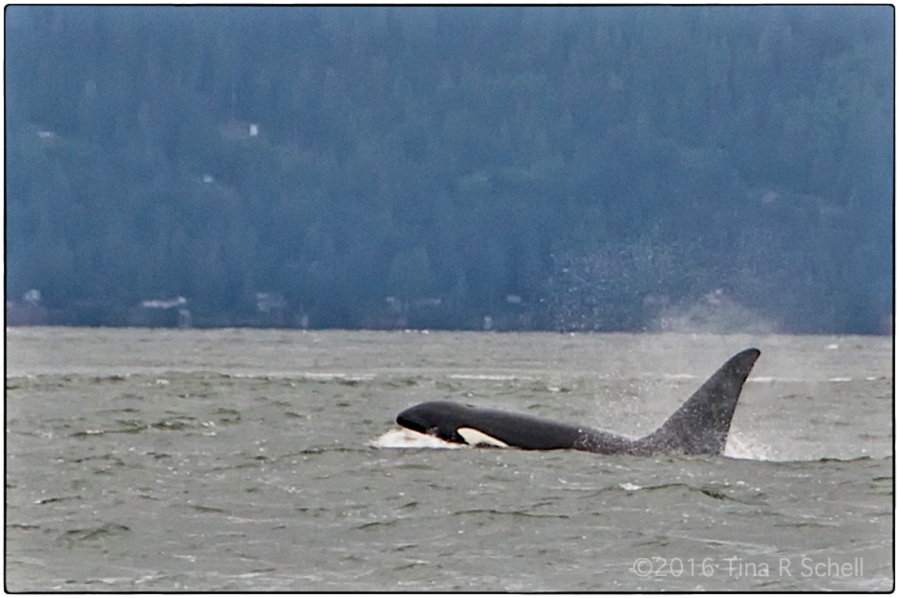 “Never memorize something that you can look up.” 😊

We were amazed by the speed and power of the whales which were clearly enjoying themselves as much as we enjoyed watching them. Our captain told us it was a combination of a few families relaxing and playing together as well as two male (bull) animals swimming on their own . Because the males were not a part of the families it was difficult to show in perspective how much larger they were than the others but the photo above gives a bit of a look at the size of one male’s dorsal fin.

The way the whales swam and jumped reminded me quite a bit of the dolphins we enjoy seeing on Kiawah, except of course for a major difference in size. It was a fantastic experience, well worth braving the cold. While the photos are definitely cropped (captains are VERY respectful of the whales and the regulations for keeping the right distance) we were actually quite close to these magnificent creatures – among the world’s most powerful predators.

One of the things I most like about blogging is the relationships we form with people they’ve never met. Special thanks to my blogging friends Andrew Seal of The Changing Palette (who, along with his wife Hilde I now HAVE met) and Deb Gale of Carry My Camera for their recommendations on things to do in their backyard (Vancouver and Vancouver Island). We’ve enjoyed it immensely, thanks in large part to their guidance. Perhaps they have some thoughts on how to drop the extra pounds some of their suggestions have resulted in as well 😄