Lens-Artists Challenge #18 – Blending In / Standing Out

“It is not our differences that divide us. It is our inability to recognize, accept, and celebrate those differences.” 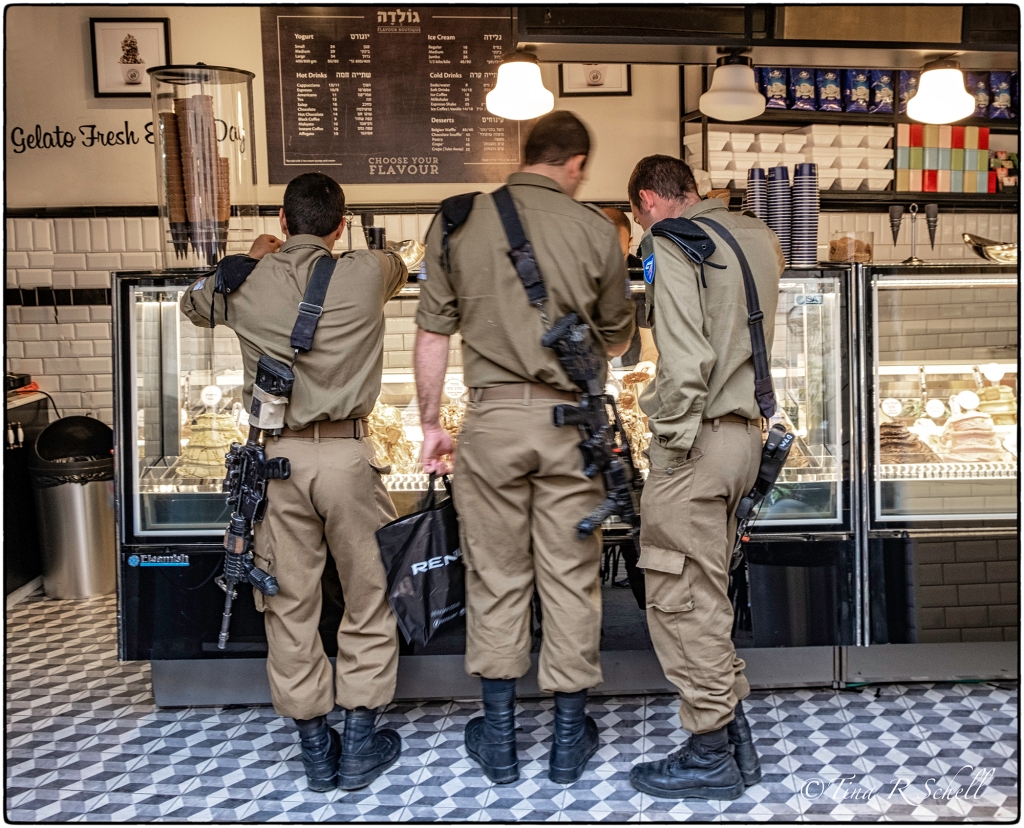 This week my husband and I in the midst of a trip to Israel.  Ann-Christine’s blending in/standing out challenge comes as we are experiencing an incredible blending of many different cultures, nationalities and religions all around us. For example, above we see three young Israeli soldiers having a break at a gelato counter. How strange for us to see their machine guns casually draped over their shoulders as they decide which flavors they’ll choose. It seems quite foreign to us, yet there are young soldiers everywhere blending into street scenes wherever we look.

In Israel, one sees an amazing array of unique costumes signifying different religions and sects. The three young men above represent an Orthodox Jewish sect known for their black hats, black coats and long payot curls. Although their dress causes us to assume theirs is a serious conversation, for all we know they may just as easily have been discussing the Red Sox victory over the Dodgers to clinch the US World Series 😊

“Honest differences are often a healthy sign of progress.”

I was surprised to see as many Christian sects represented in Israel as Jewish and Muslim. The Franciscans, such as the two shown above, are quite prevalent. They are responsible for many of the Christian churches and historic sites visited by pilgrims from countries all around the world. Again, their robes lead us to believe theirs is a serious conversation, but the bright blue sneakers seem to tell a different story!

“Things look different depending on your perspective.”

Speaking of blue, I was drawn to the headwear of this beautiful young girl in one of the alleys of Jerusalem’s Old City. While its distinct shape told me she is of a different culture than most of the young people I know, she is as intently focused on her cellphone as any other young person might be. While there would surely be differences, clearly there are also areas of commonality among the world’s many cultures.

“Differences were meant by God not to divide but to enrich.”

Finally, a silhouette of a man in religious garb moving into the light from the darkness of an alley. To me he represents everything that is  important about humankind. His garb shows his beliefs, which make him different. But his journey from darkness to light is the same for us all. Whatever our beliefs, we all face challenges, striving to be our best selves as we move through our lives. Let us focus on those things that unite us while appreciating the differences that make us unique.

On a personal note, I would like to add my voice to those who have expressed support for the victims of the Pittsburgh Synagogue attack. There is no place in this world for such hatred, nor for anti-semitism of any form. Edmund Burke once said “The only thing necessary for the triumph of evil is for good people to do nothing.” At the very least we must speak out against such acts of cowardice.