“A person can put up any kind of wall, but love and truth always find a way around it.”

This week Amy has shared her beautiful images of Machu Picchu and has challenged us to post our own examples of stunning architecture. I’ve been fortunate to have visited some amazing places – contemporary examples such as the Sagrada Familia in Barcelona, the Sydney Opera House, or New York’s City’s Caltrava Oculus come to mind.  On the other hand although I’ve not been to Machu Picchu, I’ve seen other incredible examples of ancient architecture. Following Amy’s lead, I’ve chosen to feature some of those sites in today’s post, beginning with China’s Great Wall.  The wall is thousands of miles in length and was built from the 3rd century B.C. through the 17th century A.D.  Read more about my visit to the Great Wall here.

“Sometimes our walls exist just to see who has the strength to knock them down.”

“Deep in the forests of Cambodia’s Siem Reap province, the elegant spires of an ancient stone city soar skyward above the sprawling complex of Angkor Archaeological Park”   is the first sentence of National Geographic’s description of the temples of Angkor. I couldn’t have said it better myself 🙂. The remains of the Khmer Kingdom offer an amazing view into a civilization founded in the year 802 and lasting into the 15th century.  Radar technology has identified it as the epicenter of a sprawling city, at least as large as Berlin, completely hidden for centuries by overgrown vegetation.  Inscriptions found in the temples detail the 37 years, 300,000 workers and 6,000 elephants it took to build the complex. Sadly, its decay was due to overpopulation (which defeated its advanced irrigation system) and extensive deforestation  – valuable ecological lessons for us to this day.  I’ve included many more images of the temples in a previous post here. 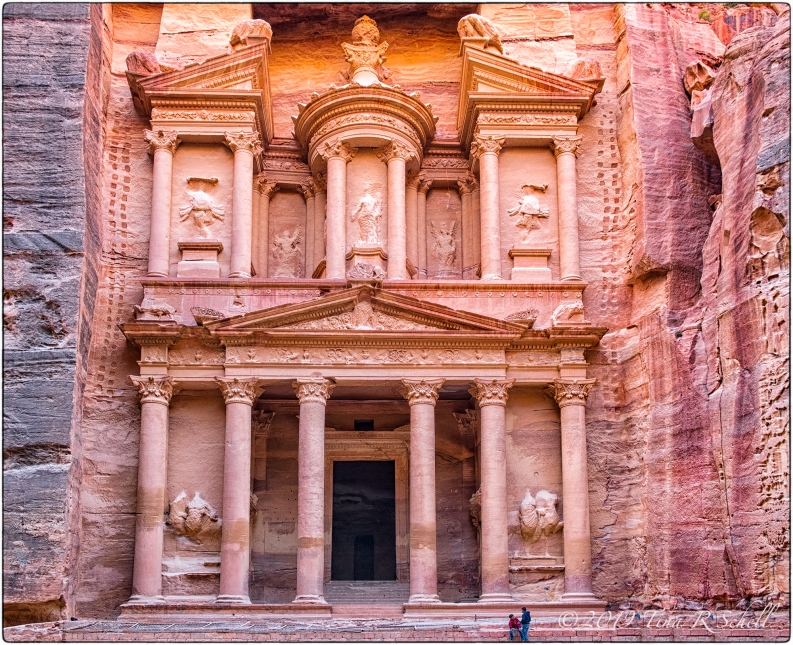 “It is better to hug a tree than to bang your head against a wall.”

High on my list of the amazing places I’ve seen are the archaeological wonders of Petra. Built by the ancient Nabataens in the 1st century B.C., it served as their capital city until it was partially destroyed by an earthquake in the 4th century A.D. The city’s structures were literally carved into beautiful rose-colored rock, leading to its nickname, The Rose City. You can get a sense of the buildings’ scale from the tiny people shown in the bottom right corner of my Treasury image above.

THE PILLARS OF ACRE

“Men build too many walls and not enough bridges.”

Finally, I’ve included an image from the ancient city of Acre (Akko) in Israel, a UNESCO world heritage site.  Built in the early 1100s, it’s one of the many archaeological wonders we explored during our recent visit. A favorite story from our trip concerned its discovery, which happened when a woman living above the site needed a repair to her plumbing. The underground ruins (which have been beautifully restored) were found when the plumber accidentally broke through her floor (or at least that is the story we were told!)  The amount of historic architecture – going back as far as the Canaanite Gate, built in 1750 BC – combined with the archaeological digs currently underway, make the entire country a must-see for those interested in architectural archaeology.

As much of the world as I’ve been fortunate to see, there are many other places still on my bucket list, not the least of which are Machu Picchu and ancient Greece. How about you, what are the places you’ve seen or hope someday to see? If they include marvelous architecture be sure to tell us about them in your response to Amy’s challenge. Don’t forget to help us find you by tagging your responses with the Lens-Artists tag.

Wishing everyone a wonderful week ahead – hope to see you right here next week for challenge #36.