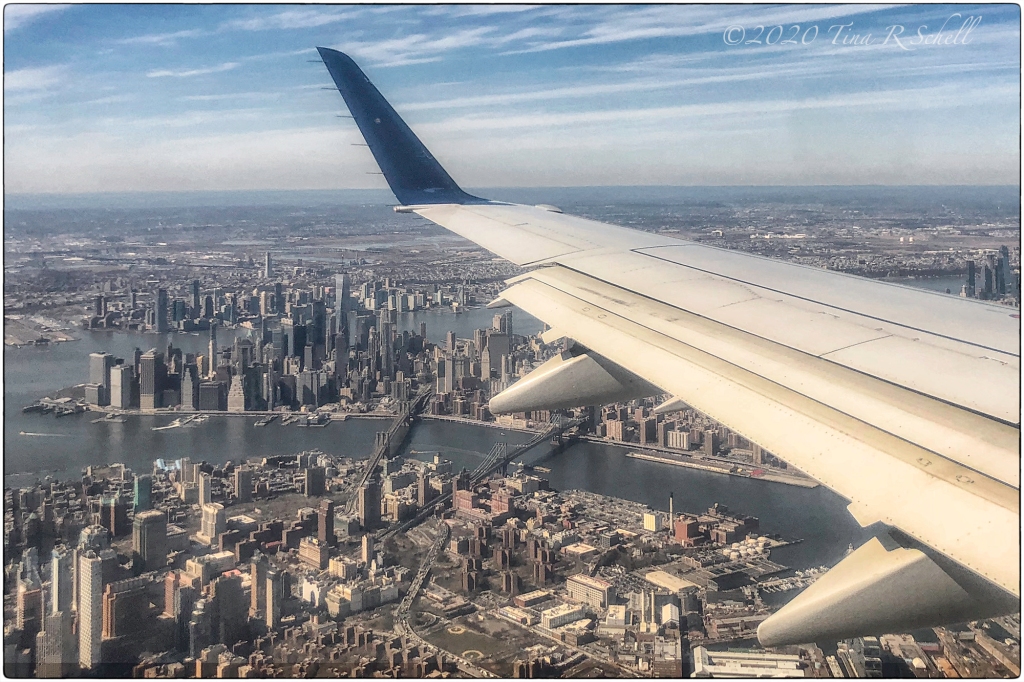 “New York; a whole cacophony of sounds and tastes that all somehow came together to form something beautiful”

This week Ann-Christine’s Chaos challenge comes just one day after the U.S. declaration of a National State of Emergency due to the COVID-19 virus. As we entered New York City just last week, we were aware of a whole new level of chaos about to descend, especially in high-density areas like New York. In the opening image I’ve shown our plane’s wing as we flew over lower Manhattan on our approach to LaGuardia Airport. In the photo you can see One World Trade Center under the far end of the wing. It is the tallest building in the  western hemisphere, standing where the Twin Towers were located prior to 9/11. Many have noted parallels to the heightened state of awareness the world now faces as nations work to protect their citizens from the spreading pandemic.

“The city was a hive from this height, the people and the yellow cabs moving about in the street below like insects.”

Home to over 70,000 residents per square mile, on weekdays that number more than doubles due to the commuting population. During our visit the city seemed slightly less crowded than usual, as businesspeople began telecommuting, schools began teaching on-line and tourists began to cancel their travels.

Virus not-withstanding, during normal times NYC residents speak over 800 languages. Stand on any street corner in Times Square to get a clear picture of the chaos that can bring. On the other hand there are oases of calm, such as the city’s Central Park shown in the image above.  Measuring 843 acres (341 hectares) the park hosts 42 million visitors each year. Note the line of uber-expensive apartment buildings on the park’s edge – John Lennon and Yoko Ono chose one of them as their NYC residence.

“New York…the crowds, the noise, the traffic, the expense, the rents; the messed-up sidewalks and pothole-pocked streets…”

Recognized as one of the world’s busiest commercial centers, the city also features fabulous museums, incredible theatre, an amazing music scene, world-class shopping and beautiful architecture ranging from elegant brownstones to towering modern-art skyscrapers. Not surprisingly, it is also rife with chaos. Can you imagine the amount of infrastructure it takes to keep the city going? There is upkeep and maintenance of the airports, bridges, tunnels, trains, subways, roads and schools. Beyond that, a complex water system delivers a Billion gallons of drinking water daily. Massive energy systems, intricate state-of-the-art telecommunication systems, and over a million buildings all require constant attention. I honestly felt we saw or heard some level of maintenance or new construction at every corner in the city.

A SENSE OF OZ

“When you leave New York, you are astonished at how clean the rest of the world is.”

All of this week’s images were made with my iPhone 8+ . Those taken from the air are cropped and edited for detail. The final image seemed a bit “vintage” to me due to its pixelation. As a former Nikon photographer, I shot it specifically because of their huge sign in front of Citi field (home of the NY Mets baseball team in the Queens Borough of NYC). I loved the way Manhattan appears in the background, rather like the Emerald City of Oz 😊. Seeing the density of the homes between Queens and Manhattan highlights the immensity of the obstacles we face in controlling the chaos of the spreading virus.

Sincere thanks to Ann-Christine for challenging us to rise above despair and focus on more positive possibilities despite our fears. Timing, as they say, is everything. She, Amy, Patti and I look forward to seeing your interpretations. Be sure to link them to Ann-Christine’s original post here, and to add the Lens-Artists TAG so that we can more easily find you.

We all very much appreciate Miriam’s joining us as last week’s Guest Host, and enjoyed going through your many beautiful responses to her Reflections Challenge. We hope you’ll join us next week as Amy brings us Challenge # 89. In the meanwhile, follow the recommendations of certified authorities, avoid fake news, and stay safe!